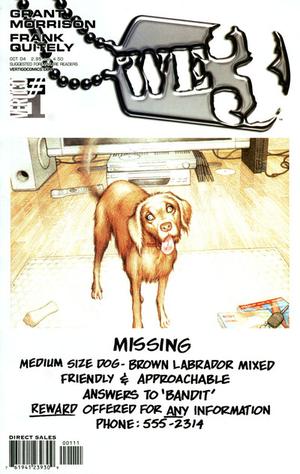 This particular image in WE3 really bothered me. The entire series of “Lost” posters made the characters real “pets” it would have been easy to cast all of the animals as the Mastiff was- cold blooded alpha animals with no souls. This particular image focuses on Bandit, the beloved retriever who loves Nylabone.

Had Bandit been just a military minded Alpha male fighting his way to the top we would suspect that he was evil. By giving him a sorrowful past of kidnapping and giving him phantom owners who love and miss him he becomes Real (based on the parameters for realness set in the Velveteen Rabbit) this separates We3 from other military minded cyborgs in history.

Visually Bandit has empty eyes, surely this is a reflection from the flash, animals are difficult to photograph, crazy red eye always happens- or is this foreshadowing? Bandit’s head is tilted at an angle, one that attempts to figure out what is going on, a theme later seen as 1 attempts to find his way home and lead his team, all with his head on straight. Bandit’s tongue is lolling however, a characteristic commonly thought of as “silly” a trait 1 doesn’t share. The text at the bottom of this poster says that Bandit is friendly and approachable which we are able to see later, he is the first of We3 to speak, and one that is concerned with being a “good dog” behaviors not seen in the “rudeness” of 2 or the fluffy headed 3.

“inert; dead; almost sarcastic in its unfeeling curves” (263)  these words stuck in my mind while I was reading The Comet. Taken out of context such as I have done, it is difficult to determine if the young woman is looking at a dead body, or a piece of technology. Even through its “death” Julia feels that it is “looking” at her. The technology that can communicate with her has some sort of life of its own that is missing, or is it? The fact that the telephone is black is also a possible commentary on race relations throughout the story- adding the lines “it was wide and black, pimpled with usage; inert; dead; almost sarcastic in its unfeeling curves” changes the tone of the lines even more. The personification of the words “sarcastic” and “unfeeling” create the idea that the phone is judging her, judging that this is the first time Julia has ever been this close to the manual workings of a telephone, judging that she lives, judging that she is a white woman trying to survive her world being fip turned upside down. Sometimes I make a survey of all of the books I haven’t read and all of the movies I haven’t seen and feel like a slight cultural failure. Following this idea all forms of Frankenstein have eluded me beyond singing “Puttin on the Ritz” once in high school- which I’m told was in “Young Frankenstein.” However, even with my entire lack of firsthand experience with the text I have a wealth of experience with the characters and plot itself. Frankenstein is so pervasive a story and set of characters that the plot is considered a “trope” and has had multiple tropes sparked in relation to it.

That being said even though I was pretty sure I had a fair understanding of the general plot I was completely unfamiliar with the framing the letters from Captain Walton provided. This actually refreshed the concept for me and made it more realistic, for some reason a man on the run or on the hunt suffering real physical effects made the story “alive” to me. Walton’s presence makes the entire first chapter’s backstory seem necessary rather than having the reader spend it thinking “get to the part about the monster!” Which I must admit if I approach a book with as many preconceived notions as I did this one, I am liable to do.